Thirty-two planets have been discovered outside Earth's solar system through the use of a high-precision instrument installed at a Chilean telescope, an international team announced. 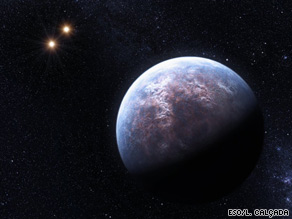 The existence of the so-called exoplanets -- planets outside our solar system -- was announced at the European Southern Observatory/Center for Astrophysics, University of Porto conference in Porto, Portugal, according to a statement issued by the observatory.

The announcement was made by a consortium of international researchers, headed by the Geneva Observatory, who built the High Accuracy Radial Velocity Planet Searcher, or HARPS. The device can detect slight wobbles of stars as they respond to tugs from exoplanets' gravity. That tactic, known as the radial velocity method, "has been the most prolific method in the search for exoplanets," according to the European Southern Observatory statement.

The instrument detects movements as small as 3.5 km/hr (2.1 mph), a slow walking pace, the observatory said.

With the discovery, the tally of new exoplanets found by HARPS is now at 75, out of about 400 known exoplanets, the organization said, "cementing HARPS's position as the world's foremost exoplanet hunter." The 75 planets are in 30 planetary systems, the European Southern Observatory said.

"HARPS is a unique, extremely high precision instrument that [is] ideal for discovering alien worlds," Stephane Udry of Geneva University, who made the announcement on behalf of the international consortium that built the instrument, said in the observatory statement. "We have now completed our initial five-year program, which has succeeded well beyond our expectations."
HARPS has also boosted the discovery of so-called super-Earths -- planets with a mass a few times that of Earth. Of the 28 super-Earths known, HARPS facilitated the discovery of 24, the European Southern Observatory statement said. Most reside in multiplanet systems, with up to five planets per system.

Although only 32 were announced Monday, the team knows of many more exoplanets, although more observation is needed before they are formally announced and papers are written about them. "We have tons of them," Udry said.

In return for building HARPS, the consortium was provided 100 observing nights per year over five years to search for exoplanets, one of the most ambitious searches ever implemented on a global basis, the European Southern Observatory said.

"These observations have given astronomers a great insight into the diversity of planetary system and help us understand how they can form," team member Nuno Santos said in the statement.

The HARPS findings confirm the predictions of those who study planetary formation, Udry said. "Moreover, those models are also predicting even more ... Earth-type planets."

In addition, the discovery gives "a very strong push" to projects attempting to find and study such exoplanets, Udry said.

According to its Web site, the European Southern Observatory is the foremost intergovernmental astronomy organization in Europe and describes itself as the "world's most productive astronomical observatory. " It is supported by 14 European countries

Strong evidence of wet past on Mars