The biggest star explosion yet seen may be the best known example of a rare type of star death that leaves no "body" behind, astronomers say.

The unusual blast, dubbed SN 2007bi, appears to be a textbook example of a pair-instability supernova, a theoretical type of explosion proposed for very massive stars—those more than 140 times the mass of the sun.

Although most supernovae leave behind black holes or dense stellar corpses called neutron stars, pair-instability explosions would be so intense that the whole star would be obliterated.

Pair-instability supernovae have been hard to spot, however, because stars more than a hundred times the sun's mass are extremely rare.

Spied in images of a distant dwarf galaxy taken by an automated telescope, SN 2007bi was about 40 times brighter than a typical supernova, and it took about three times longer to reach its maximum brightness.

"Anything that takes that long to rise and is that bright has to have a lot of mass," said study co-author Peter Nugent, an astrophysicist at the Lawrence Berkley National Laboratory in California.

Massive stars normally die when they run out of material to sustain nuclear fusion, and all that's left in their cores is inert iron.

This means the core is no longer producing a steady stream of photons, which in a living star creates outward pressure, keeping the star from being crushed by its own gravity.

Without this stable outward pressure, the star collapses, generating a supernova in which the core gets crunched down to form a black hole or a neutron star.

But for even more massive stellar titans, astronomers think the cores quickly get so hot that their photons start to split apart into pairs of electrons and positrons.

This leads to an instability between the star's temperature and pressure, sparking a devastating explosion that flings the star's remains into space.

The star effectively vanishes, although a lingering cloud of expanding gas can remain visible for a while. 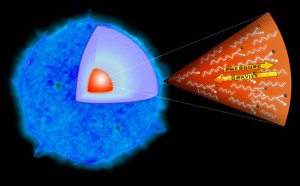 Pair-instability supernovae were first predicted more than 30 years ago. But evidence from previous candidates—including a bright explosion seen in 1999 and another in 2006—were inconclusive, Nugent said.

By contrast, SN 2007bi seems to fit the bill almost perfectly. If confirmed, studies of the newfound supernova could have major implications for computer models of star formation in the early universe, Nugent said.

That's because pair-instability supernovae were likely much more frequent in the early universe, when stars with masses several hundred times that of our sun are thought to have existed.

When these megastars exploded, the ancient, powerful outbursts scattered debris that might have sown the seeds for future stars.

A pair-instability supernova "may be a one-in-a-trillion type of event," Nugent said, "but they may actually be very important" in understanding the evolution of the universe.