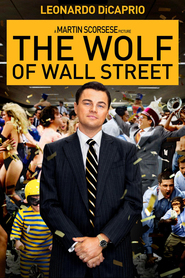 Martin Scorsese has never been the person to shy away from making what he thinks will be a great movie and most of the times the movies are great. I would not put this in that category but is still a good one, There are some moments in the movie which really stand out than the rest, yet on a whole leaves the audience somewhat dissatisfied, The movie is filled with profanity and does not have any regrets about it, I thought it was overkill. I did not expect myself laughing so much along the way , I expected it to be another Wall Street movie, but its not,

Its a Wolf in Sheeps' Clothing (Pun Intended).

The movie is based on a real life story of Jordan Belfort (He is also a writer of the movie). His rise to the top and his fall, yet this movie is quite different than what you would expect.

Leonardo Stands out with another good performance as Jordan Belfort, and you can see the maturity in his acting, not that it was missing before, but Scorsese always manages to pull the best out him.
Jonah Hill as Donnie serves as a good side kick.
Matthew McConaughey is also there in a small but memorable role.

The movie is filled with Drugs, Sex, Money and some more, yet the movie is not heavy handed, Its shown with a light heart, It goes overboard some times but you can live with it.
Its a good one time watch and be ready to say the word F**k a lot once you come out.