The Mars rover Spirit has uncovered the strongest evidence yet that the planet used to be wetter than previously thought, scientists reported Monday.

The robot analyzed a patch of soil in Gusev Crater and found it unusually rich in silica. The presence of water would have been necessary to produce such a large silica deposit, scientists said.

"This is a remarkable discovery," principal investigator Steve Squyres of Cornell University said in a statement. "It makes you wonder what else is still out there."

Spirit previously found clues of ancient water in the crater through the presence of sulfur-rich soil, water-altered minerals and explosive volcanism. But the latest find is compelling because of the high silica content, researchers said, raising the possibility that conditions may have been favorable for the emergence of primitive life.

It's unclear how the silica deposit formed. One possibility is that the soil mixed with acid vapors in the presence of water. Others believe the deposit was created from water in a hot spring surrounding.

The durable Spirit and its twin, Opportunity, have been working on overtime since completing their primary, three-month mission in 2004.

For eight months, Opportunity has explored the rim of Victoria Crater on the opposite side of the planet. Scientists are looking for a safe opening to send the rover in.

The mission is managed at NASA's Jet Propulsion Laboratory in Pasadena. 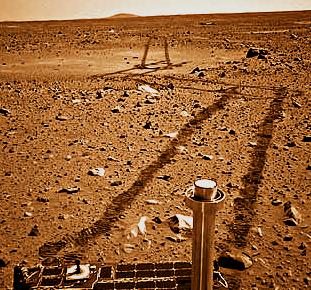 A patch of Martian soil analyzed by Spirit is rich in silica -- strong evidence the red planet was much wetter than it is now.