OK, It is official, every tech geek, or even people who know just a bit about tech is talking about HDTV, I know that at least in India, we are far off from receiving HDTV transmission, but it hasn't stopped anyone from talking or for that matter buying a HDTV, and for the uninitiated HDTV stands for High Definition TeleVision. Now for the actual details HDTV is nothing but addition of lot of pixels and I mean a lot of pixels to rgular TV broadcast.

Let me start with what we are recieving right now,

For us to know better there are two kinds of transmission in place Progressive (p) and Interlaced (i) scans. then there are standards PAL,NTSC and SECAM.

Progessive scan is simple, it draws all the pixels from left to right then top to bottom in a progressive manner, Interlaced video is a bit different, it first draws the odd lines first, and then the even lines are filled up in gaps left, Interlaced video saves bandwidth, which was the reason why it was created in first place. 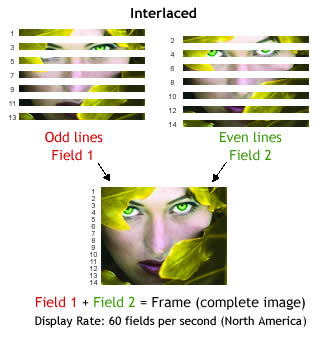 As for the standards part we are currently using phase-alternating line (PAL) In this context, unqualified PAL invariably means

And now comes the HDTV, HDTV is most of the cases is used broadly and has many resolutions. so you can be a bit confused by companies saying that thier TV is HDTV, So I think you can now understand what those thing mean when they say the TV is 720p, 1080i.

The current standards of HDTV include.

Now the next things are also in works its UHDTV, Ultra High Defnition 2540p and 4320p.

The following table contains links to every standard out there with detailed info on all the things from our best friend wikipedia.